What is steel and how is steel made?

Overview of the steel production process

Steel is principally made via two routes, the last Furnace-Basic Oxygen Furnace (BF-BOF) route and the Electric Arc Furnace route (EAF) - often referred to as the 'primary' and 'secondary' paths. The former is used to create new or 'virgin' steel, the latter is often used to recycle steel scrap

Large European blast furnaces can produce around four million tonnes of iron per year. They rely on a chemical process called reduction: Iron ore is an iron oxide and to separate iron from oxygen carbon is needed as a so-called reducing agent. In the process it combines with the oxygen and forms carbon dioxide. Carbon is necessary for reduction and this is why C02 emissions are unavoidable in this process. European steelmakers have minimised the amount of carbon used as far as it is possible within the thermodynamic limits of the process.

Coal is used as the main carbon-bearing material for steel making. It also serves to generate the high temperatures necessary to smelt the iron ore. Liquid iron is about 1,500 degrees hot when it leaves the furnace.
Since iron is brittle and not easily formable it has to be turned into steel in a second step. This takes place in a basic oxygen furnace, also called a converter. Converters can hold up to 400 tonnes of hot metal. In a converter, oxygen is blown onto the liquid iron to burn unwanted elements. When this process step is over, the iron has turned to steel.
The liquid steel is then cast into solid slabs or ingots and processed to long products like bars or wire or flat steel strip in several rolling operations. Other additional operations to enhance the characteristics and functions of steel include tempering or coating.

Just under 60% of total EU steel is produced via the BF-BOF production route. 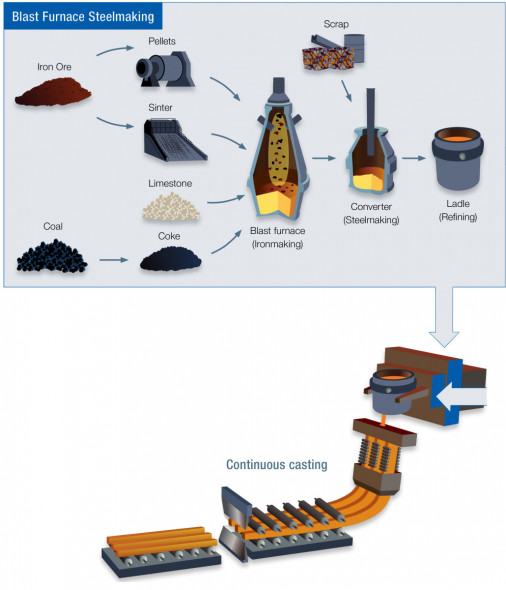 Electric Arc Furnace Route
Main feedstock for EAFs is steel scrap but they can also smelt solidified iron or sponge iron. The typical capacity of an EAF is about 1.5 million tonnes per year. Key components include graphite electrodes. The heat necessary for melting the metal comes from an electric arc that arises when the electrodes make contact with the metal. Arc temperatures can go as high as 3,500 degrees, while the temperature of the molten metal is about 1,800 degrees.
EAFs can produce all kinds of steels, from metal for basic products like reinforcing bar to stainless and high alloyed special steels, where flexibility and smaller capacities are advantages. Further process steps like casting and rolling are comparable to the blast furnace route.

Just over 40% of EU steel is produced via the EAF production route. 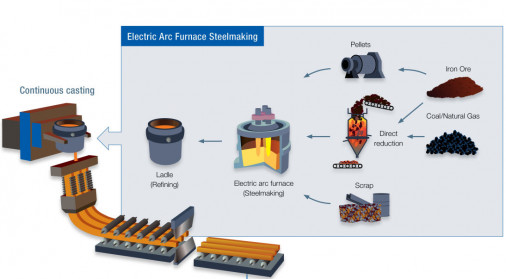